Current weather – we had until October lots of rain with little wind this green season, which is unusual for Phuket. Now at the end of October 2020 we start to get more sunny days. The diving is great with fantastic visibility. Let us hope that soon tourists can come back without spending 14 days quarantine as well.

The rain arrived this year already in June 2020, about 2-3 month earlier than usually. Lots of rain but without strong winds which allows us to do occasionally dive trips with a handful of divers who remain in Phuket to some of our dive sites. That the rain arrived early gives us hope of more sunshine in September before our high season starts in mid-October. If international flights resume, we are ready to take you diving around Phuket, Phi Phi and the Similan Islands. Let us hope that the world can return soon to normality.

Weather high season 2019 – winds were generally light, from the northeast, and we had mostly hot, sunny days this time of year with the temperatures in the low 30s Celsius. Great diving weather! The summer low season saw typical mixed weather – many days in our “rainy season” are hot and sunny, with some occasional thunder showers. Some days are windy and some days are calm. There are occasional cancelled dive day trips due to big waves. It’s often very hard to predict daily forecasts. This is tropical living, it can rain any time or you can get great weather in the “wet season”.

High season earlier in 2018 was very sunny, we had several months with virtually no rain, although we had some heavy rain in January 2018 – very unusual. The weather in high season 2017 was also very good – blue skies, warm days, although a little breezy, making a few waves on the ocean. Just as you’d expect in the high season! Sometime in May (there’s no exact date) the weather always starts to change as the west winds blow across the Indian Ocean. The “high season” weather starts again sometime in October.

We tried before to keep this weather page updated year round, but it’s hard to keep up with weather reports – we are busy at Sunrise Divers looking after our customers needs! However, check the Phuket Weather Blog which has Phuket weather updates along with photos and lots of useful links.

Weather in Phuket – Patterns and Seasons

The weather in Phuket follows certain patterns which are pretty easy to understand. As divers, we are naturally concerned about what the weather will be doing when we are diving. We like sun and calm seas, but diving continues all year unless it’s really bad – this is very rare.

Every year is different. Some years are wetter, some low seasons are drier, and high season months can be rainy sometimes too. But the weather is normally pretty decent here in Phuket! The weather changes to “wet” sometime between end of April to early June. Normally the summer months are pretty good – certainly more sunny days than rain, but the weather is unpredictable and you can get wet and windy days. Rain is usually sporadic short showers and can be very localised – rain in Patong beach but not Karon, just a few km away for example.

The “good” high season weather starts again sometime in October/November and lasts until April/May. The months November – February are a few degrees cooler due to fresh NE winds. March and April can be really hot, with very little wind.

The weather in Phuket is not as simple as “high” and “low” seasons, which tends to imply half a year of sun and half a year of rain! For sure in high season you can get some rain and in the low season there are many beautiful sunny days. All we can say is that on average you get less rain from November to April.

It is worth noting that during the rainy season, or on a wetter high season day, even if it’s raining on the island of Phuket, you are likely to have more sun when you are out at sea. The mountains on Phuket top 500m, so trap clouds and promote thunderstorms. Often a day’s diving is sunny, with a rain shower speeding over, you’ll get a suntan, but you might get wet when arriving back at the port! 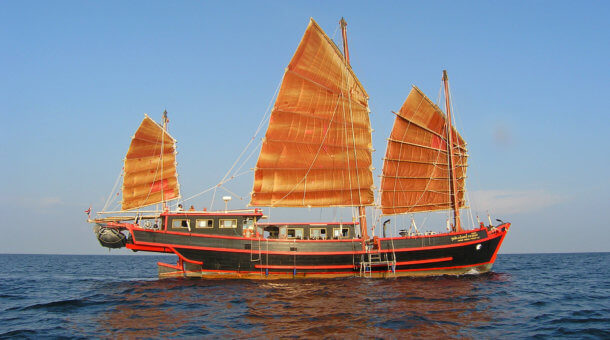 Experience a totally unique Similan Islands liveaboard diving cruise onboard a Chinese sailing Junk. The Junk "SY June Hong Chian Lee" is one of the best known Phuket liveaboards, and carries a maximum of 18 customers to the Similan and Surin Isl [...] Prices starting from 250 / day 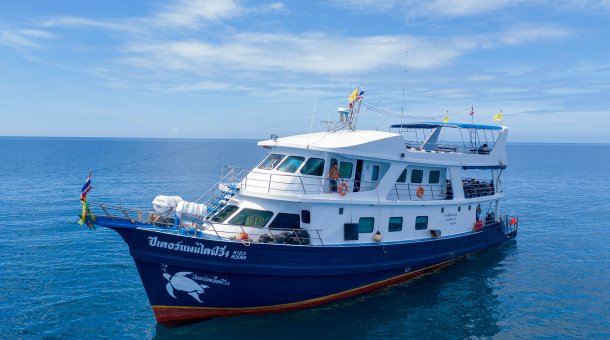 Peter Pan is a budget liveaboard for the Similan Islands. Dive tours include diving at the famous Richelieu Rock, Koh Tachai and Koh Bon. She offers a good service for maximum 23 divers. The dive boat was built in 2002, has been completely refu [...] Prices starting from 6600 / day

Diving in Thailand and Myanmar - The luxury liveaboard Diva Andaman runs 6 night trips to the Similan Islands and the Mergui Archipelago. The boat was completed in 2009 and has been one of our most popular boats. Early booking is suggested. It's [...] Prices starting from 18800 / day

A great Thailand and Burma Liveaboard since 2018. The Phinisi (also called Cheng I Sao) is an Indonesia Phinisi style sailing boat, built in 2007. The Phinisi has been operating in Indonesia, the Maldives and Thailand, and now has a full schedule [...] Prices starting from 300 / day